Of all men among the zodiac, Gemini man is the most charismatic.

He is the vibrant, energetic type that could naturally attract people to him. In other words, he has lots of qualities making him irresistible. No matter whomever he gets connected with, his attitude and energy is infectious.

Is Gemini man jealous in love?

This guy is typically laidback and has no problems of letting things go easily; however, it doesn’t mean that he doesn’t have any petty emotion such as becoming jealous.

Though he has a little bit of reputation of being jealous in love romance, he is able to set aside the negativity that is affecting his life.

Learn about this quality of a Gemini here!

What are Signs Telling a Gemini Man is Jealous? 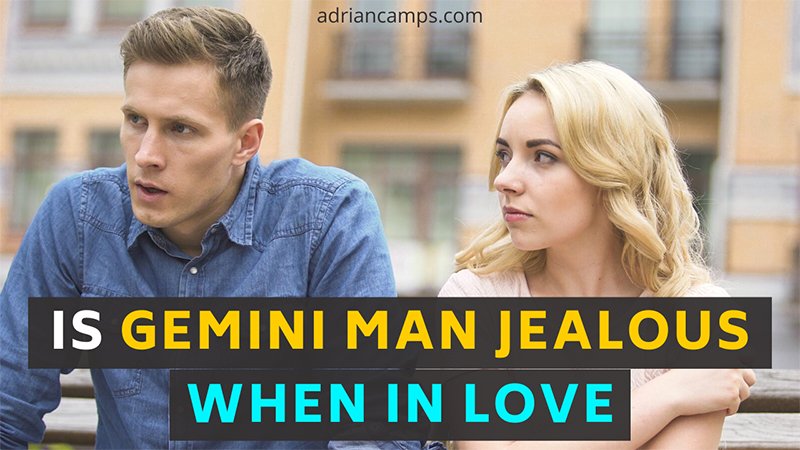 Finding out when your Gemini displays his jealousy is probably difficult, especially when does not tell you anything.

But, there are several signs helping you realize with much ease:

#1: He will check on you more on frequent

The Gemini male will not act like this; indeed, checking on someone is not his usual nature. Normally, he often offers you all the freedom when in love. Nevertheless, if he suddenly checks on you, then the chance maybe he is jealous of something.

#2: He will put limitations on himself

It’s very rare for a Gemini to feel insecure in love.

The matter is: he’s likely to change his own habits once strongly sensing his jealousy and fear of losing you. This guy never says no to any party, but he will willingly cut on his partying hours just to spend more time with you.

#3: He will put limitations on you

Not only himself, but Gemini man also starts putting some limitations on you.

As a social person, he completely understands the true value of having a large social life. If you find your Gemini partner tries to stop you from being friends with new people or requires you to return home within his curfew, definitely he is jealous.

#4: He will be in an unpleasant mood

The male with the Gemini zodiac sign is usually lively. Nonetheless, you can tell that he is feeling jealous if seeing him mumbles grudgingly or snaps repeatedly.

A jealous Gemini usually pretends like he feels nothing when seeing you talking friendly to other guys. Rather than letting you know in a direct way, he tends to hide his feelings deep inside. But of course everything has its own limit!

As the point he can’t bottle up his jealousy anymore, he will pull out disappearing acts and behave strangely to you.

Why is a Gemini Man Jealous?

Some of you may wonder why such a confident, charming guy like Gemini can become jealous at times.

Isn’t he the freedom lover who respects his partner’s privacy?

This guy is often questioned about his faithfulness. Many claim that he can’t stay loyal due to his flirty nature – while there are some truths to this statement, saying him completely unfaithful is overreaching. The issue here is that Gemini man is slow to make commitments; well, you can’t blame him since Gemini is a mutable sign.

He has a great need for freedom and space. Women who get involved in a relationship with a Gemini guy will sometimes feel frustrated because of his need. He falls in love quickly and enters a relationship without caring whether he is ready or not. At a certain point, he will be suffocated and want to walk away – this is a reason leading to his unfaithfulness.

Learn about Gemini man in bed for more info!

All of these confusions and complexities have created a labyrinth of emotions inside the Gemini. If he just leaves them unsorted, they will later turn into a negative energy causing him to act jealous.

How to Deal with His Jealousy?

It’s good to know how to handle your Gemini boyfriend when he becomes jealous.

When dating a Gemini, you must assure your faithfulness to him even though he is a confident, self-assured person. This is due to his dual personality! Normally he doesn’t act jealous as he values his own social life a lot.

Also, he encourages you to focus on whatever you like and respects your space.

He has many interests to participate in, which surely distract his attention from the woman he loves. So if you are in love with this guy, he likely wants you to build a world independent of him. He has a big scare of clingy people!

But, at times, Gemini man may feel insecure because of all the complications happening within his personality. Gradually, he will slowly develop a possessive feeling towards you. You’re advised to shower him with constant encouraging and motivation, especially if he is feeling extremely low.

Appear next to him whenever he calls and says he is missing you, and it’s much better to assure your ultimate devotion to him.

A typical Gemini guy will not get jealous just because you hang out with some male friends. Nevertheless, as each coin has both sides, he may have his bad days when seeing you prioritizing other men over him. This situation usually happens if he feels not confident enough – lack of confidence will bring out his jealousy.

Handle the whole circumstance with tact and grace!

Rather than ignoring your friends to please him, try to learn and understand the root of his insecurity. Make an empathic conversation and let him know that he is the most important person in your life.

As long as you boost up his confidence, your commitment with others will be fine.

The reputation of Gemini man as being extremely jealous is unfair and not true at all.

He only feels jealous when he becomes unsure and insecure in love. But, it’s just because he loves you so much and is afraid of losing you. In fact, jealousy is a popular human trait that every person possesses in certain degrees.

Don’t get annoyed with a jealous Gemini; instead, acknowledge his flaw and try to take it to your advantage to bring spice to your relationship.