Rejection is one of terrible emotions that no one wants to experience.

But, as life enjoys humiliating us, I believe most may suffer from being rejected at least once. It’s never a good feeling; in fact, you start doubting everything about yourself when someone turns you down.

What made you feel so certain before now seems uncertain. Rebuilding the confidence is not an easy process. Fortunately, knowing how your zodiac sign copes with this matter can better your healing.

Known as a positive sign in the zodiac, how do Geminis act when getting rejected?

Learn more in the following…

When a Gemini is Rejected… 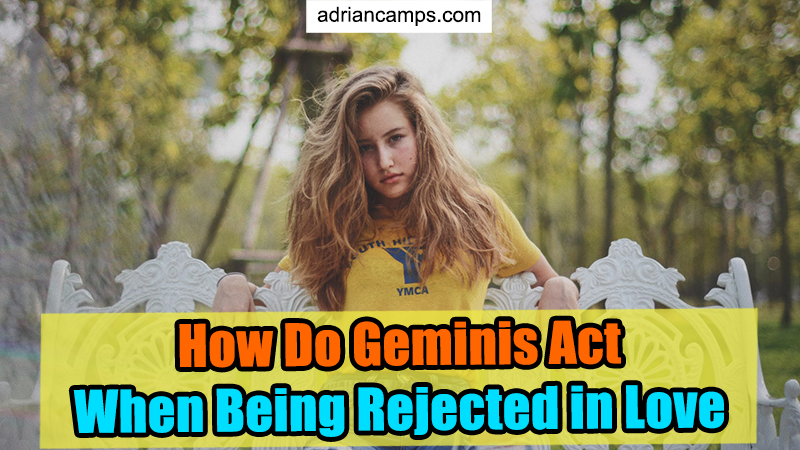 According to astrologers, Geminis must confide in others to survive.

This is a communicative and honest sign, so they find it hard to bury that issue deep down in their heart and ignore it. Also, as expected from positive individuals, they never want that negative feeling surrounds them all the time.

That’s why the best way to deal with this is to share about it with someone they know well. If you are their friend, get ready because Gemini will talk about the rejection nonstop. They hope that if they say they’re still doing fine without the person rejecting them for several times, they will end up believing it.

Those who are close to Gemini, like family and BFFs, won’t be fooled that easily.

Geminis act like they can handle it like any other things. However, deep down they are actually devastated and don’t know how long they can bear with it. Talking about that with someone who listens willingly may help distract themselves from the pain.

If you’re a Gemini, it’s good to keep yourself distracting.

Freely talk about it with anyone you trust until there’s nothing left to reveal and see how long your sadness lasts.

How Does a Gemini React with Rejection?

Their first reaction may be rejection sucks, LOL.

It could ache a bit inside since Geminis rarely hear ‘no’ in their lives, but it’s not that much to be dramatic or drawn out, excepting when you push them on the edge (which I’ll talk later).

They’re fine, at least that’s what they put on display. Of course they feel down after the initial shock, but it’s Gemini, you know. These people will soon look for someone new because they’re not THAT MUCH emotionally invested in relationships.

For them, it’s all about relishing and having fun. If someone rejects them, then it’s their mistake. Unless they love that person much, or they confidently will never try to hang onto those who have no feeling for them.

The Most Foolish Thing Geminis Do When Feeling Rejected

It’s understandable if we act foolish when feeling rejected and hurt. Many studies have proven that we humans tend to act without thinking logically much if our feelings have wounds. We can do things out of character when being upset. Not really that much destructive, but it’s still not good for us.

Coping with a huge ball of pain makes us do what we might regret later.

Have a look at the most foolish thing Geminis do when they feel rejected here.

On the surface, they look like they aren’t bothered by rejection and think that those said ‘no’ to them for any reason is just an idiot. Yeah, how can they reject such an attractive, fun, and smart person like Gemini? That’s at least the thought and image about themselves they want to protect.

But, obvious as I mentioned above, the whole situation really affects them, in a bad or worst way.

They do feel the rejection more deeply than how they show to the world. If anyone pushes them off the edge, they many get involved in verbal fights and even bring up various kinds of dramas.

We all know Geminis are moody as hell, so don’t mess up around them especially when they just got rejected.

How Does a Gemini Reject You?

Hmm, this part is interesting!

We’ve just talked about how Geminis act when being rejected. But then, what if it’s Gemini rejecting you? Have you ever experienced this or had any thought about it?

Again, being turned down is never easy to handle.

Nevertheless, these things sadly happen as a matter of your life. Whether you like it or not (which I’m sure no one), it’s necessary to prepare yourself to face it one day. In this case, probably your Gemini love interest may reject you after your confession.

How exactly do they do it? Do they make it obvious about not wanting to be with you or else? Well, it all depends on their zodiac characteristics. I have to admit it, due to Gemini dual personality, sometimes it’s hard to understand them.

This is a sign which is very attractive for dating. They’re just irresistible, but the worst part of trying to chase after them is you’ll have a tough time keep up with them. You’ll never know where to stand with them because they can’t just stay still for a minute.

They may instantly get drawn to you but soon will lose their interest as well.

Gemini has an infamous line that they mainly use it when rejecting someone; that’s: “It’s better to stay friends.”

So, how do Geminis act when getting rejected?

Many may think Geminis will move on quickly, but it depends. Some do get over that suck feelings after a short time; however, some doesn’t sit well with the word ‘no’ and will continue to chase after whatever it is despite the fact they’ve been rejected.

Fortunately, thanks to their optimistic nature, most of them won’t let the whole rejection thing make them sad for a long time. It may last for a couple of days, but then they will shrug their shoulders and focus on other things.

At the end of the day, it’s not their loss and they will never go begging anyone.

For more information about Gemini in general, please have a tour in this website and leave your comment below.