Home » Horoscope » Gemini Man Heartbroken After A Breakup (What To Expect?)

How a Gemini man deals with a broken heart?

We all go through the heartbroken stage at some point in our lives, and each of us has a very own way to handle that pain…so does your Gemini lover.

Is he the type of person who lets his feelings eat him up until he moves on? Or, does he act like nothing happened and then cry quietly in his private space?

Many claim it is possible to bring him back!

Though the breakup may hurt him terribly at first and seems like leaving an unfadable scar on his heart, the Gemini male will be able to recover and get over with it. Positive and optimistic, he learns how to walk towards the healing path with ease.

Find out about Gemini man heartbroken in this article!

Things to Know about Gemini and Breakup 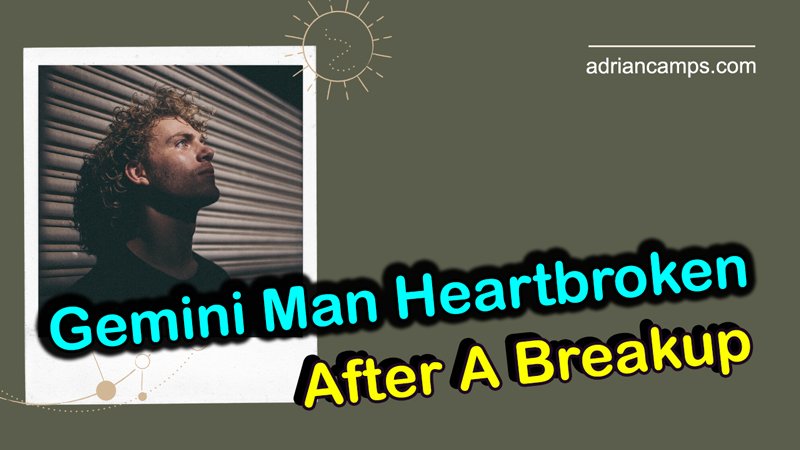 How does a Gemini man act after broken up?

Like Aries, this guy tends to act like he doesn’t give a damn, even when he really does. However, according to astrology, he is superficial and has his own pride; thus, he doesn’t feel guilty at all. Instead, he more believes the core of everything lies in you (aka the one broke his heart.)

If he is no longer with you, then he will continue looking for a new partner who is more compatible to his personality and worthier to his investment.

When a Gemini Male Broke up with You…

Perhaps you’re sensing that he’s going to break it off with you or the fact that you two have been separated. Either way, take a look at the following ideas to know what it actually feels like when that situation occurs.

Before he decides to break up with you, there were many times he felt unhappy and wanted to break it off. However, he tends to put off that matter as Gemini man hates dealing with emotions. That’s why he ended up by making you get tired of him and cut off with him!

In case your Gemini lover enables to cut it off, then you’ll experience something strange and painful.

As I told you, he tries to avoid all the emotions after a breakup yet still secretly keeps you in check to see if you’re truly alright. This guy will often contact you even when everything is over between you and him.

Does Gemini man come back?

Chill out, ladies! Calling you or texting you doesn’t mean he wants to get back together; actually, it’s just his guilt.

He doesn’t want you or others think about him as a terrible boyfriend; therefore, checking on you is a way showing he cares and is not mean to you. I can understand why you feel confused with his behavior; but, keep in mind that if he does this, he just wants to ease his mind, nothing else.

#2: It’s miserable in his treatment

Put it simply, he treats you miserably.

Before both of you reach the departure point, the Gemini male will hint a couple of signals indicating his lost interest in you, such as stop calling and texting, stop answering your questions, and spend very less time with you.

In order to make himself not available to you, he’ll come up with any possible reason and excuse. This man doesn’t mind saying nasty things when he wants to break up; that explains why he deeply wishes you were the one ending the relationship. If you know the implication of his signals and cut it off firstly, he will behave like a good person.

The funniest thing is that he will try every way to reach you by phone after broke off the relationship with you. Sounds frustrated, right? Don’t fall into his guilt move – it has nothing with getting you back; indeed, this is how he eases your broken heart and how it makes him feel better.

If the Gemini is treating you this miserable way, then he doesn’t deserve your precious time and affection at all.

One of the reasons a Gemini man broke up with you may be because of his ultimate crave for variety.

Due to his inconsistency, this guy usually cuts it off with his current loved one and seeks new challenges in another woman. He prefers anything but routine or staying with the same person for a long time; maybe this is the reason to ease his guilt of cheating.

In other words, he will end the relationship, go out with someone else and have fun on his own, and then get you to come back again.

You should recognize this kind of his behavior and never let him return into your life as he’s just not worth. The moment he leaves out of sudden, you can easily tell that he goes to another woman.

For anyone curious about Gemini man heartbroken, please note that he is not the emotional type who will curl up in bed and cry out for days. In fact, this optimistic guy is more optimistic than you thought – he will soon find a new relationship and continue enjoying his life to the fullest.

Nothing or no one can stop him from discovering new things in this world, since he is the not person putting love as his priority.

All of the information I’ve mentioned here reveal that your Gemini boyfriend seems to be back and forth when it comes to relationships and breakups. Keep an eye out for his acts and behaviors to avoid yourself hurting from his decision.

Make sure you catch the correct signals and have serious conversations with him before he leads things onto the wrong track. Understand his personality traits and change yourself in a better way so that the two of you can head down a brighter path in love.

If he still treats you like nothing after all of your good changes, then it’s time to move on.