You just got into a fight with your Gemini partner and now he’s hurt.

What to do when a Gemini man pulls away?

It seems like he will distant himself from you once feeling hurt. However, the reality is that the way this man acts when he’s hurt depends on the situation. Sometimes he will figure it out on his own without involving you.

But there are times he just wants to shut out from the world, and you included in, for good. Many are usually confused with Gemini man upset behavior and end up accidentally pushing him further away.

You just don’t understand his emotions…

Learn more in the following!

Tips to Handle When a Gemini Man Ignores You… 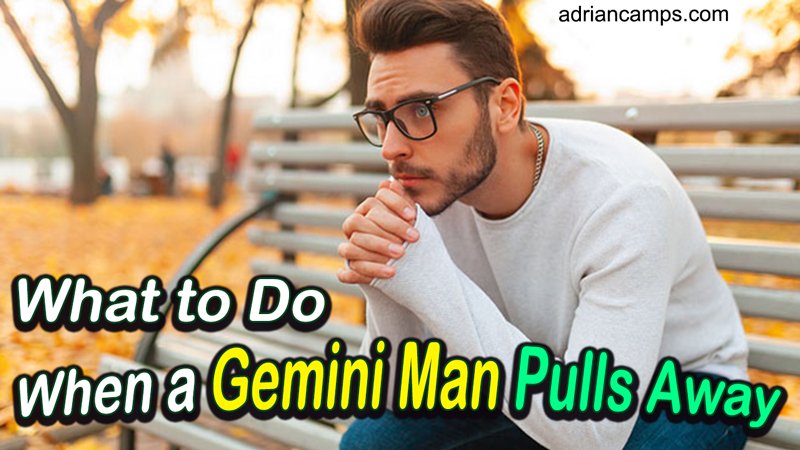 Firstly, you must know how badly he is hurt; then consider everything between you and him (relationship, communication, etc.)

If you caused a deep emotional cut for him, then it will be tough to ask for his forgiveness. Even in a committed relationship, he won’t mind cutting off the connection with you if the wound is severe.

But that’s just the serious reaction.

In case you have an intense argument with him, he will withdraw from you. He needs his private space and some time alone to let out his sadness and frustration. So don’t be surprised if he stops talking to you all of sudden.

There’s no exact answer for when he will talk back to you because it totally depends on how he feels.

We’re going to discuss what you should do to make him behave normally again:

What to do when a Gemini man ignores you but pretends like nothing happens?

Then you must directly address this issue with him before more misunderstandings are built up making the relationship of both serious. Talk to him with gentle manners and avoid doing things bothering him.

Don’t overlook the problem, especially when he turns it down as soon as you mention it. Instead, tell him you know this has been annoying him and you really wish both can figure it out for a better relationship.

Make an apology and then offer a logical explanation to help him realize what you did has reasons, not totally wrongdoings. He is the type easy to forgive but having a difficult time to forget. No matter how hard he tries to move on, what you did or said that caused emotional pains will stick with him.

Therefore, the possibility of him not trusting you does exist. If you still do nothing, he may become secretive to protect his heart. In this case, it’s never a bad idea to take initiative. This Gemini male may show no sign of what he’s feeling but you can easily tell there’s something not right with him from your instinct and experience.

Address it as soon as possible to prevent it from getting worse. Nevertheless, you shouldn’t push or force him if your partner seems to be terribly upset by things you brought up on the surface. Since you’ve said, now it’s up to him to take the matter and decide how to solve it.

Get tips on making a Gemini man think about you with a click!

How about your Gemini man not telling you why he’s upset?

He is a talkative and sociable guy; however, he’s quite secretive about his personal matters. Especially when a Gemini gets hurt, he chooses to withhold the reason. It’s clear that he is moody about something; rather than speaking it out, he decides to distance himself.

In this situation, there’s nothing much you can do because that’s when you should respect his personal thoughts. You can’t force him to say the reason, and even a sweet talk with him can backfire because the timing is inappropriate.

I advise you to do nothing at that moment.

Simply give him private space and time. Though it may be hard to let him handle his emotions alone, it’s the best thing to help him get back to his normal state. Once he settles everything smoothly, he will open up to you.

Or he can choose to leave the past behind and move on with the present; if so, you will never know what actually happened. Don’t think too much about that – if he thinks it’s not worth his time, emotion, and energy, you should put it aside too.

3. If he gives you the cold shoulder…

A Gemini man won’t go incommunicado easily unless what you said indeed offended him. Or, your actions or attitude could deliver wrong ideas making him think you disrespect and do not care about him at all.

In all likelihood, he will give you the silent treatment.

Not forever of course, I mean he needs to disconnect from you for a short period to think about the whole situation, analyze his feelings, and consider the relationship with you again. He will collect his thoughts and put everything under his own evaluation. Sometimes your Gemini partner will ask for advice from his family and close friends.

Once he pulls away, it means he really needs time. Being alone in a quiet space can heal his frustrating emotions. Due to his personality traits, he can recover quickly but his feelings for you won’t be as same as before. This man will become more protective as he’s afraid of getting hurt again.

He will send a message to let you know he’s fine and ready to talk, so simply leave him alone with his thoughts. In case you don’t get any text back after a long time waiting, then reach out to him to make him realize how much you care.

Make sure what you say is open and honest.

So, what to do when a Gemini man pulls away?

Communication is always the key in any relationship, though. Be patient and give him some time to settle his mind. Once he’s ready, he won’t mind telling you everything and the two of you can work out any problem together.

If you are dating a Gemini, don’t try to control or take the lead as he loves to set the pace in a relationship. Also, he doesn’t want to love someone who is aggressive and takes away his freedom.

Leave your comment if having any question about this topic!